Now, how many of you will remember not so long ago a Channel 4 programme called Robot Wars?
For those of you that do, you will be pleased to hear that for a while now we have been offering this event, Robot Wars, to you using the original kit from the show! A client came to us wanting to use Robot Wars over in Amsterdam to finish off their week-long conference so I donned my clogs and off I went for a lovely little jaunt!

Robot Wars, for those of you not in the know, is basically 4 robots competing in a ring with the main objective to crush the opposing player’s robots. The show had people building their own unique designs with various weapons or shields in order to be the last one in the ring after all the rounds.
We of course do not use weapons on our robots! There is a very nifty spade which will efficiently turn over the machines to render your opponent immobile and each contestants corner has a bumper on it which robots hit to score points during the game.

We are lucky enough to be in contact with two very special people involved in the Robot world Ian Lewis who is World Champion and built ‘The Razer’ featured so much on the programme and James Cooper who was UK Champion of Robot Wars.

So, the three of us arrived in Amsterdam on Thursday complete with Robot Wars stage and after a late set-up at The Radisson SAS Schiphol, we were ready for the Friday team building event.
As Robot Wars is a competitive event, in order to add a team build element we asked each team of 8 to design their own robot not a working model and these would be judged.
After a brief introduction, Ian Lewis spent half an hour doing the ‘Razer Show’ with his original robot – which will hurt you if you get in the way! And then gave teams values and ideas in order to create the best design. Style, weaponry, creativity and will it actually go! are the categories for scoring and armed with various card, spools, paint, and other items the teams launched into their robot build with vigour.
In between the build, team members played heats outside on Robogeddon and this was great fun although getting them off the stands was something of a challenge!
The final scores were put together and the judging began on the robot build with James and Ian. There were some fantastic finished structures but there can only be one overall winner and the team were thrilled to have been chosen.
All in all a super event, although taking down the Robot Wars structure is a long winded task where people with lots of muscles but no long nails are required I sat and supervised from the sidelines! and then the journey home.
Thanks to Gary, Ian and James who really made the event come to life and also the Radisson SAS Amsterdam Schiphol who were so helpful and very professional. A lovely hotel if you are looking for something not too far from the airport and with good facilities. 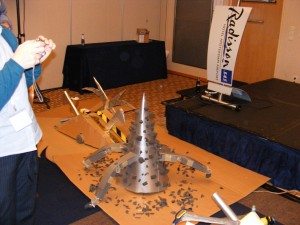 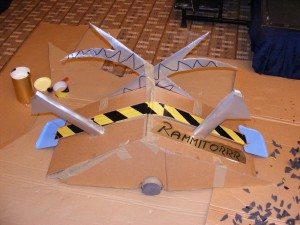 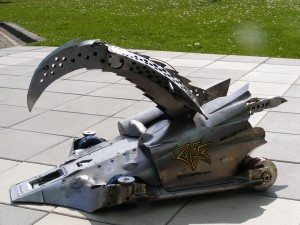 Last Friday I had the pleasure of running an event for a very large National Sporting Committee. As part...