I am currently recovering from a truly ‘rocking’ event yesterday held at the fantastic Malmaison Hotel in Oxford. My client booked our School of Rock activity as part of a two day team building event for 46 staff and we were to run on the afternoon of the second day to really finish the conference with a bang. 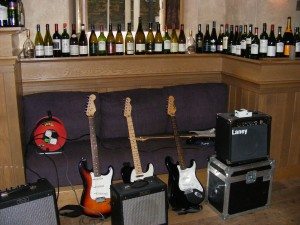 Our School of Rock event takes a lot of preparation especially when we are using a hotel rather than recording studios where the equipment is mostly set-up etc. Therefore, our crew of 8 instructors and co-ordinators arrived in Oxford at 10:30 and whilst unloading 6 drum kits, guitars and bass guitars, amps etc we ran through the schedule which was to start at 13:00. The Malmaison Oxford was absolutely perfect for the Jailhouse Rock theme running throughout the day. The Malmaison chain has turned the former Oxford prison into a stunning hotel whilst keeping a lot of the original prison features. The drums were to be placed in the main A Wing whilst vocals and the two guitars sections would be in downstairs cells. 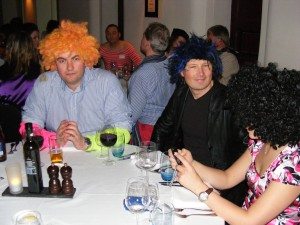 The group having no idea what they were about to do rose to the challenge bravely and after auditions on each of the instruments and vocals the 6 bands were announced by our crew. Tuition then starts for each section and the chosen song Alright Now resounded around the hotel!
After a short break, rehearsals take place and costumes are chosen from the various items we had brought.

The final performances normally follow straight after rehearsals however the guests went off to change for dinner allowing us to strip the rooms down and set-up the stage ready for the final acts! In very good spirits, the bands returned to give absolutely fantastic performances with some of the men giving the ladies a run for their money in the costume stakes! Absolutely fabulous!

Once packed up and vans loaded the client enthused how wonderful it had been and was sure that the Elvis impersonator they had booked for the end of dinner would carry on their high spirits but had a lot to live up to vocally!! 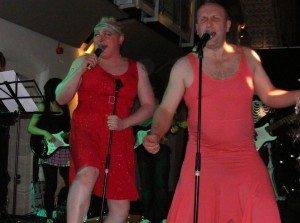 If you weren’t aware of our School of Rock activity then do take a look at our web page and call me to run through any technical information or timings. It really is a great event which takes most people out of their comfort zone but then gives them the realisation that as a band they can join together and the performances are stupendous!

Release your inner rock star and give it a go!

Well I think the signs are very positive for a much stronger, healthier 2010 in terms of client entertainment, conference...