Yesterday the Daily Mail had an article about Princess Eugenie’s (6th in line to the throne no less!) birthday day out – a treasure hunt around Windsor Great Park! The group of twenty-somethings took part in an organised scavenger hunt using bicycles to travel around the park. Just goes to show the flexibility and adaptability of treasure hunts are fantastic for fitting any requirements, age or venue!

At Team Tactics we’ve been working on several new treasure hunt team building formats this month, including a treasure hunt that has teams using GPS technology on a specially developed app to work on the Samsung Galaxy tab. We already have fanstastic existing treasure hunts including the Hunt, Camera, Action format in which teams use a camcorder to shoot in different locations, which at the end produces a hilarious commercial. Our Ocean Treasure hunt has to be the ultimate high-octane event, in whichÂ teams are divided into RIB’s and powerboat along the Solent. Or how about one of our most popular events, the Cab Clue Trail? Haring around London with their own London cabbie, teams put their detective skills to the test!

Treasure hunts are a fantastic tool for team building and staff entertainment, whether it be finding new ways for your team to interact, encouraging creativity, improving morale, or an alternative fun-filled day out the office, we have a treasure hunt event for you! We recognise that our clients are all unique in their requirements and the make up of their teams. That’s why we’re proud of the range of treasure hunts we have. They can be held in any major city around the UK and the clues, puzzles and prizes can be personalised to your company, a great way of tailoring the message and values communicated. Contact us today for more information on our low-cost but highly entertaining treasure hunt packages. 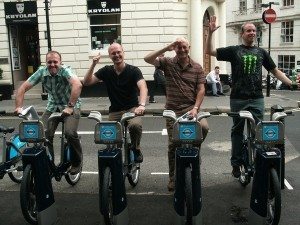 […] old favourites such as the Cab Clue Trail. For more information check out our recent blog postsÂ on treasure hunt team building events. Who needs Barcelona or Rome? London’s got it all! Let us know your favourite events […]

England's recent exit from the Cricket World Cup can be partly blamed on the exhausting winter tour the England Team...