The Henley Festival Line up for 2013 has been announced and once again promises a glittering festival of style and substance befitting of Henley’s ever eclectic music line-up. Legends such as the Beach Boys and Madness are joined by the modern face of jazz Jamie Cullum and young talent Paloma Faith while Henley’s Shaken and Stirred blockbuster celebrates 50 years of Bond with a spectacular show of big tunes, stunts and cameos with music featuring the Royal Philharmonic Orchestra.

The festival’s five headline acts will be performing on Henley’s fantastic Floating Stage.

A fantastic array of musical talent is once again on display at this stylish festival, with other performers in Henley Festival’s 2013 line up ranging from jazz and classical to the dance DJ Ben Zaven Crane. 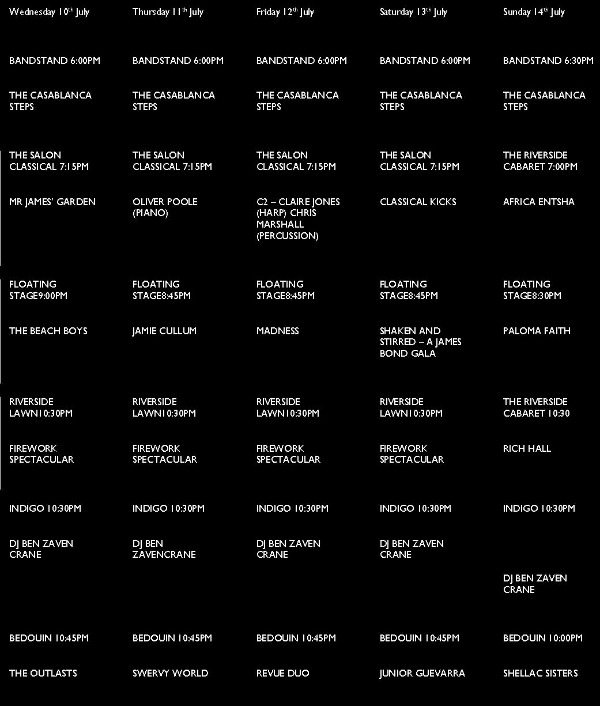 A moment of Madness at the 2012 Henley Festival

Such was the enthusiasm of Suggs, the famous front-man of Madness to perform at the Henley festival that he tried to do so last year! In the audience the 2012 Henley Festival, a rather inebriated Suggs decided to make an impromptu appearance on stage alongside Sting. (un)Fortunately, Suggs was escorted from stage before he could join the vocals.

Music and More at the Henley Festival

The Henley Festival experience is about more than just music. Situated idyllically on the banks of the Thames, this stylishly smart festival is a vibrant social occasion, and a spectacularly immersive cultural experience with artwork adorning the festival lawns, comedians, fireworks, fantastic food and many surprises. Listen, laugh, love and live at this thriving festival which is a great occasion for entertaining guests.

Discovering The Shard | A New Shape on the London Skyline

The Great British city of London is both a modern cultural melting pot and a city of rich heritage. The...