It was treasure hunts in London all last week. We were stretched to our capacity. Funny how some weeks we are pushed to the limit on certain events, whilst others like corporate cooking go quiet. Perhaps it’s something to do with the summer time and sunny weather that gets people thinking they should be out and about rather than stuck indoors doing a team building exercise that motivates the great outdoors.

Whatever it is, it’s a great way of getting people engaged in and around London. I was interested to see that when I had one group arrive in a pub near Oxford Circus last Thursday, many were shaking hands and introducing one another. I was told that some worked on the 11th floor whilst others worked on the 14th floor. Same department, though different roles. So what my client did was to mix the participants up into teams of five.

Off they strode, hitting the iconic areas of London, for this particular treasure hunt, we incorporated Covent Garden, Trafalgar Square, a little of Whitehall and The Mall leading up to Buckingham Palace.

For our company, we only specialise in running treasure hunt using our Samsung tablets in Central London. We don’t do other areas. We feel we are best focussing our efforts on one area, ie London rather spreading ourselves thinly everywhere. Can’t be a master of everything!

Me being the person who set up the questions in the first place, I think it would be fair to say that I have a certain amount of bias! However, seeing everybody’s faces when they return, asking them ‘Did you find the nose’? The sheer pleasure on people’s faces is there to see. ‘What about the Nazi memorial, did you get a picture?’

The feedback we get is terrific!

It’s a great team building exercise that I think doesn’t tax people too much, its really just fun. Years ago, I went to view a product and sampled the event myself. One of the exercises involved working out who was related to who is a massive family tree. Boy, my brain couldn’t work it our, neither could my counterparts! Guys, we don’t do stuff where people are going to be undermined or indeed not be able to do the task in hand. Everything we do is FUN!! We only enjoy doing event that we too can understand!

One of last week’s testimonials 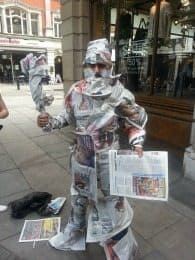 In January 2014, we revamped our GPS Treasure Hunts with new clues themes and bonus challenges. Our most recent client...